The objective in the research on fallacies was to find the inhibitors and antidotes to fallacies that hinder or avoid the evolution of adaptive systems and environments.

Fallacies are unconscious actions with apparent conscious outputs. For this reason, the discussion of fallacies is a taboo. People cannot accept being interpreted by others unless they demand it in a counseling environment.

These shortcuts are in fact fallacies that are built sustained by the “fears” an individual has. These fallacies are triggered by greed and, in the case of teamwork, are motivated by the envy the apparent success of others’ greedy actions generates.

There are three types of greed that influence human behavior:

The purpose of greed is acted out by the exertion of power and sustained by manipulation to ensure the achievement of results.

“Greeders” tend to accuse others for their greedy actions while they deny their own greed.

This is the paradigmatic case of greedy intellectuals who accuse greedy businessmen/women for their greedy doings.

The discovery of the inhibitors and antidotes of fallacies provided the necessary tools to ensure professional work in adaptive environments.

Excerpt of the book “The Origin of Fallacies” by Peter Belohlavek

NOTE: The Unicist Research Institute has been, since 1976, the pioneer in complexity science research where the Unicist Evolutionary Approach was developed.

The research on fallacies began in 1985/86 based on those fallacies that had notorious negative social and institutional consequences. The research was developed at The Unicist Research Institute and was led by Peter Belohlavek.

The discovery of perception, reasoning and conceptual fallacies demanded almost 17 years (2003), which contributed to the research on the roots of fallacies and their ontogenesis that developed their conceptualization after hundreds of “fallacious” hypotheses, until their final validation in 2019.

The research showed that all fallacies have the same purpose, which is to maintain the comfort zone of an individual. As fallacies are non-conscious processes, the people involved are not aware that they are trying to maintain a comfort zone. This process can be detected after a fallacy has been installed and the consequences became evident.

This research began based on a set of fallacies that the researcher experienced in the 1980s. The main ones were:

On the one hand, this competition is what expands the quality of the solutions and allows going towards a superior level of functionality. The competitive approach is natural for human beings who are working on the solution of problems or developing new solutions.

On the other hand, cooperation is necessary to ensure that the adaptive process remains functional. This cooperation requires that the participants need to be internally complemented in order to be able to emulate a complementary cooperation in mind.

The generation of fallacies in adaptive processes is based on three core aspects:

The definition of what is possible to be achieved is the first step to avoid fallacies. It makes fears unnecessary and guides the action processes.

The universal inhibitor of fallacy-building is the use of unicist conceptual engineering that integrates the fundamentals of “things” with the necessary technical knowledge to ensure the functionality of solutions.

The universal antidote for fallacies in the development of solutions in adaptive environments is the use of unicist destructive pilot tests to evaluate solutions.

Excerpt of the book “The Origin of Fallacies” by Peter Belohlavek

NOTE: The Unicist Research Institute has been, since 1976, the pioneer in complexity science research where the Unicist Evolutionary Approach was developed.

Superiority complexes are based on superior functional intelligence implying a structural different attitude. Their feeling of superiority is transformed into a complex when they begin to use their superior functional intelligence in fields that cannot be managed with that approach. But their need of sustaining their superiority forces to try to do so. The result implies blaming the environment for the paradoxical outcomes. 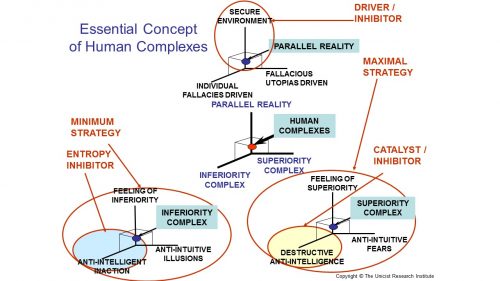 Superiority complexes are implicit in the decisions taken by anti-intuition in a fearful environment using the anti-intelligence to destroy the object that is threatening the self-perception of superiority.

Extremely talented individuals develop this complex while they live immersed in a mediocre environment. Mediocre environment are those that not include respect and admiration to the members of the group that have the capacity to add higher value.

When the relation with authority doesn’t include respect and admiration talented individuals become marginal. “Nerds” are some of the names that degrade the talent of an individual and transform a factual superiority into a personal complex.

On the other hand, talented individuals who perceive that their skill has no social value develop an inferiority complex if they are socially rejected.

To avoid destruction they become aggressive to the environment. The aggression might be active when it their complex is not integrated with an inferiority complex or passive if they perceive inferiority when dealing with other fields than the one (or several) they are talented in.

Characteristics of the Superiority Complex

The main difference is given by the fact that Superiority Complex driven individuals toward an active role in the environment. Thus they use to be aggressive using both active aggression and/or passive resistance as a way to attack the environment.

They do not work in teams. They are “solopreneurs”.

NOTE: The Unicist Research Institute was the pioneer in using the unicist logical approach in complexity science research and became a private global decentralized leading research organization in the field of human adaptive systems. It has an academic arm and a business arm. https://www.unicist.org/turi.pdf