The discovery of behavioral objects explained how concepts drive human conscious actions, integrating the data available in the long-term memory, involving the semantic, episodic and procedural memory. It explained that the deeper the level of conceptualization of individuals is, the higher the level of abstraction capacity that is needed and the better their capacity to emulate a reality is. 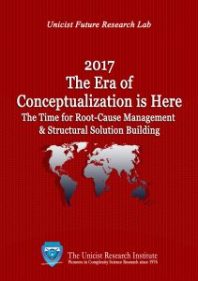 Concepts are the behavioral objects that drive human conscious actions; the level of depth of these objects defines the actions that are driven. The lack of concepts makes the information stored in mind work as independent meaningless entities.

The research that led to this discovery showed that the concepts individuals have work as the behavioral objects that guide their actions.

It has to be considered that human actions are triggered by intuition. Intuitive approaches are spontaneous impulses that are based on the analogies, preconcepts or concepts individuals have in mind. In this sense, analogies foster illusions, preconcepts avoid personal risk-taking and concepts allow emulating in mind the nature of an external entity to drive conscious actions.

The research on the ontology of concepts described their structure composed by a purpose, an active function and an energy conservation function. This essential structure that is implicit in nature (ontogenetic intelligence of nature) including human beings and their creations, is the basis for conceptualization. When the unicist structure of a concept has been apprehended, conceptualization is possible, and the individual is able to emulate in mind the structure of a concept.

The use of the unicist ontology of concepts began in the early ’80s. This allowed developing multiple applications with the participation of individuals who had different levels of conceptualization. The research was developed using the complexity science research methodology.

This document describes the conclusions of how concepts work as behavioral objects establishing the framework that provides the necessary security to empower personal inner and external freedom to develop value generating actions. 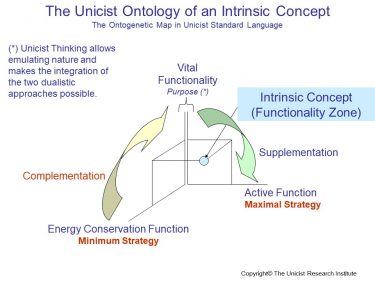 Concepts describe the living creatures’ essences and their evolution laws. That is what we call their ontogenetic intelligence.

Living creatures possess intrinsic concepts. This means that these concepts exist in themselves and only need to be discovered.

On the other hand, inanimate beings have extrinsic concepts, which are deposited on them according to their functionality.

As there is a generic concept for each species that defines its purpose, its expansion action (and entropy) and its conservation function, such concept is cross-cultural and timeless, as long as the species does not become extinct.

Intrinsic concepts are functional. They do not exist because someone believes them or not. They exist intrinsically.

On the other hand, extrinsic concepts describe the ontology of a living being and depend, for their existence, on the fact that they are believed. 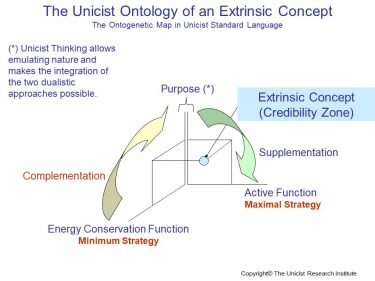 In both cases, concepts are not integrated by three different elements, they are “one”.

The purpose, the energy conservation function and the active function of a concept are integrated by logical rules which sustain their unity.

The supplementation law is a relation between elements with redundant purposes and verbal functions, having a different homeostatic element.

One of the elements has a superior “myth” that challenges the evolution of reality.

The complementation law is an interdependent relation between two elements, actions or ideas.

Each one of these elements has what the other element requires and they both have a coincident homeostatic element.

Concepts as Strange Attractors of Information

The idea of a concept is stored in the semantic memory and allows integrating the information that permits transforming the idea of the concept into actions. This role is homologous to the function of the strange attractor of the chaos theory.

A concept has been apprehended if it has been stored in the long-term memory.

Long-term Memory is integrated by:

These three types of long-term memory are integrated. They store the cognitive objects that people need to respond on time to influence an environment.

The objects stored in mind must fulfill several conditions:

A knowledge object is stored in the three types of long-term memory:

Concepts regulate and drive human actions. The concept an individual has defines the purpose the individual wants to achieve. The absence of concepts generates meaningless actions or inactions. Concepts have different depth levels according to the conceptualization capacity of an individual. These levels are:

Each of these concepts works as a behavioral object, which is a special type of knowledge objects that defines the possibilities of individuals’ actions. Understanding the functionality of these behavioral objects requires managing the rational description of their concepts and having a high level of consciousness.

Level 1) The Idea of the Concept

The functionality of the idea of the concept is a behavioral object that allows an individual to focus on a purpose and integrate the functional information that is necessary to build an intellectual image of what wants to be done. The idea of a concept gives meaning to the data included in the semantic memory and integrates it.

This behavioral object includes the operational concept an individual has but also the procedures an individual needs to follow to achieve specific results. It allows following the necessary actions focusing on the different patterns of the ontological segments. It integrates the data included in the semantic, episodic and procedural memory.

This behavioral object includes the functional concept an individual has and also the capacity of dealing with the future based on the knowledge of the nature of what is happening in the present.

Concepts are the behavioral objects that drive human conscious actions; the level of depth of these objects defines the actions that are driven. The lack of concepts makes the information stored in mind work as independent meaningless entities.

People need to have concepts to associate the data they have in mind. Therefore the use of concepts is basic in any adaptive process or learning activity. Accumulating non-associated data in mind is a meaningless effort that can generate no intelligent action.

Analogies and preconcepts are a fallacious substitution of concepts to avoid needing to assume the responsibility for generating value. The lack of concepts is perceived through the actions of an individual that produce no results and destroy her/his reliability in the environment.

The level of conceptualization an individual has can be upgraded by developing actions and measuring their results in fields where the individual has assumed the responsibility for generating value. It takes time. In real life, these upgrades, based on personal experiences, drive individuals towards wisdom.