The function of stem cells in the human body is homologous to the function of concepts in the field of human actions. While stem cells can give rise to specialized cells and thus organs, essential concepts allow building unicist objects.

The knowledge of the essential concepts is basic to build unicist objects because these objects are the materialization of a concept.

Under certain conditions, organs can be transplanted and this is also the case of unicist objects that can be replicated as long as they belong to homologous and analogous entities.

The knowledge of the Unicist Theory allows using a double dialectical approach to reality to emulate the organization of nature using an object driven organization.

Nature is organized by objects which can be observed in the ecosystem. The human body is an example of the organization of nature, where organs are homologous to unicist objects. That is why the transplantation of organs became possible.

While the structure of the different organs of the body derives from the stem cells, the unicist objects derive from the essential function of an entity that is defined by its concept.

Properties of Stem Cells and Concepts

NOTE: The Unicist Research Institute was the pioneer in using the unicist logical approach in complexity science research and became a private global decentralized leading research organization in the field of human adaptive systems. It has an academic arm and a business arm.
http://www.unicist.org/repo/#Unicist

This research began in 1976 with the hypothesis that in nature there are mutations that are random but others that are driven by a purpose.

If this hypothesis was confirmed and there were a purpose, Peter Belohlavek concluded that there would have to be an intelligence that defined such purpose.

For this reason, Belohlavek researched on the essential structure implicit in nature’s intelligence to be able to predict and exert influence on the evolution of complex adaptive systems when possible.

Charles Darwin demonstrated the adaptation process of species that, having the same structural constitution, developed adaptive changes to live in a certain environment.

The hypothesis of Belohlavek’s research was that these changes were driven by an intelligence that underlies nature. 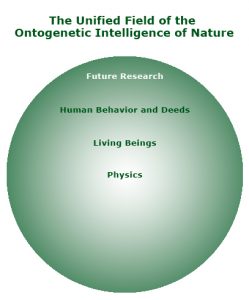 He concluded that each living creature’s evolution is ruled by its ontogenetic intelligence, that defines it as unique both in its species and individuality and that the essential structure of this intelligence is integrated by a purpose, an active principle (entropic function) and an energy conservation principle.

The research was focused on the unified field of living beings.

The basic assumption that sustains this development is that the evolution of living beings, their behaviors, actions and deeds are driven by the same logical structural framework.

This implies that there is an intelligence that defines the structural behavior of any entity that integrates this framework that allows predicting the behavior of all the entities where this intelligence is known.

You can find the complete document on the “Discovery of the Ontogenetic Intelligence of Nature” at: http://www.unicist.org/repo/#Unicist

NOTE: The Unicist Research Institute was the pioneer in using the unicist logical approach in complexity science research and became a private global decentralized leading research organization in the field of human adaptive systems. It has an academic arm and a business arm.
http://www.unicist.org/repo/#Unicist

The Unicist Research closed the gap between macro and micro behaviour. The unicist complexity research approach implies dealing with applications while researching, which requires that the lapse of research time be very long in order to achieve fully accurate predicted results before validating a hypothesis. 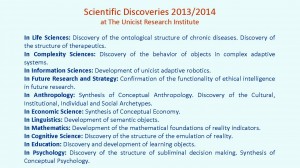 As it has been done every year since its foundation, The Unicist Research Institute synthesized this January the researches that had been finished until that time. After 38 years, 2013/2014, can be considered the year in which the integration of macro and micro behavior could be confirmed.

The gap between the macro and the micro cosmos has been and is still a problem that theoretical physicists are closing. The integration of the field of macro and micro behavior, that has been solved by Peter Belohlavek, is homologous. It allows integrating social behavior with individual behavior, making human complex adaptive systems manageable.

The publication of Conceptual Economics, Conceptual Anthropology and Conceptual Psychology are some of the milestones of this process that included the researches developed in 2013-2014 (see image above).

You can access Conceptual Economics and Conceptual Anthropology at:
http://www.unicist.org/repo/#Economy

If you want to access the “Drivers of Human Behavior” that explain the structure of human intelligence, please access: www.unicist.org/repo/#Psychology

NOTE: The Unicist Research Institute was the pioneer in using the unicist logical approach in complexity science research and became a private global decentralized leading research organization in the field of human adaptive systems. It has an academic arm and a business arm. http://www.unicist.org/repo/#Unicist

The Unicist Ontology of amino acids allows understanding its functionality and the possibilities of their integration to build proteins. Their purpose is given by the side chain which defines the different functions amino acids can fulfill. 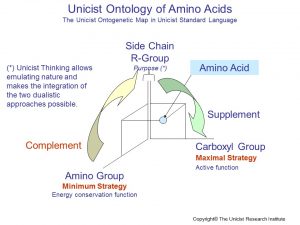 It has to be considered that the Unicist Ontology emulates the ontogenetic intelligence of nature that was discovered which defines that there is always a purpose, an active and entropic principle and an energy conservation principle. The unicist ontology of amino acids is a demonstration of how this intelligence works.

Amino acids are biologically organic compounds integrated by amine and carboxylic functional groups, driven by a side-chain specific to each amino acid. The key elements of an amino acid are carbon, hydrogen, oxygen, and nitrogen, though other elements are found in the side-chains of some amino acids. 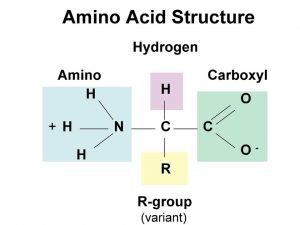 Amides can be thought of as forming from the reaction of an amine and a carboxylic acid. In the same way, two amino acids can combine to form a dipeptide, held together by a peptide bond.

NOTE: The Unicist Research Institute was the pioneer in using the unicist logical approach in complexity science research and became a private global decentralized leading research organization in the field of human adaptive systems. It has an academic arm and a business arm.
https://www.unicist.org/healthcare/wp-content/uploads/2015/02/turi.pdf

The research on the UOIN was developed by Peter Belohlavek and started at the beginning of the 80’s. It was a step by step discovery based on the apprehension of the nature of social phenomena entering afterwards in the institutional and individual evolution. Its integration with biology and physics was the final stage that was achieved.

The Ontology of Ontology

Living beings naturally transfer their functionality to the environment where they act, depositing functions that have the living being’s same logical structure and that generate the existence of extrinsic concepts.
Extrinsic concepts have the same logical structure but they are not implicit in inanimate beings; they are deposited by the living beings they are functional to. This is the origin of the ontology that has been used for many years in philosophy and now also in the field of systemic sciences, complexity science and to deal with adaptive systems. This is what unicist ontology is about.

Peter Belohlavek found that systemic methodologies did not apply to the research of complex systems where there is a conjunction of objects and/or subsystems. Influencing the future meant understanding the nature of a reality in its essence and not from an analytic-rationalistic approach.

To “manage” the nature of businesses the understanding of the ontogenetic intelligence of nature is necessary. You are welcome to deal with the nature of reality in order to be able to develop diagnoses, scenarios, forecasts and strategies.  In the field of adaptive systems “playing by ear” produces paradoxical results.  The intuition has to be confirmed. This is just one case where the saying “hard training, easy combat” is confirmed.

Your comments are welcome.

If you would like to receive monthly information on new scientific developments, please register here.

If you would like to get acquainted with unicist technologies, you can participate in a module of Unicist Strategy.